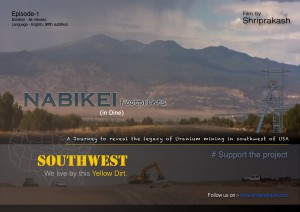 Southwest   We live by this Yellow Dirt

The American Southwest—especially the sovereign Indigenous nations of Acoma, Laguna, and the Diné or Navajo Nation—has a long history of uranium mining. Once home to a booming economy and proudly called the Uranium Capital of the World, these Indian reservations and poor White communities are now littered with old mines, tailings dams, and other uranium contamination, which is the legacy of this deadly industry.  On the Navajo Nation alone, there are  more than 500 abandoned uranium mine sites that need to be addressed.

In spite of the US government’s Clean Air Act,Safe Drinking Water Act, and the Radiation Exposure and Compensation Act, supposedly strict and powerful regulatory agencies like the Nuclear Regulatory Commission, and the United States Environmental Protection Agency are almost helpless to mitigate the contamination left by the nuclear industry.

This film explores how colonialism, which came to the Southwest with Spanish conquest, has changed face in modern time, as it is played out in a new quest for mineral resources.

Contaminated land, water, and air has left these poor communities helpless. Their efforts to gain justice have failed. Indigenous and poverty-stricken communities who suffered the most are trapped and exploited, as new mining companies continue to disregard the health and environment of these people with the lure of a better economy, jobs and new In Situ Leach uranium mining methods.

Unfortunately, this is the same sad story repeated in other parts of the world including India, but in India it is the government itself undertaking the enterprise and repeating the same degradation in Jadugoda (Jharkhand).